skip to main | skip to sidebar

This year AD 2011 was quite outstanding considering what has happened to me and what thankfully did not come about.


First stunt
One of the first days of January, I visited my Dutch friend here in the village. He showed me the crumbling wall of the boiler building standing on a kind of embankment. I ran down the slope and got my left foot entangled in some brambles.

So instead of running down I had a short flight and the prospect of a hard landing on the tarmac. Thus I tried some rowly-poly but anyway, you have to touch ground on something and in my case it was the elbow instead of my head. Hospital, arm in a sling, 20 sessions with a physical therapist.

Even now, my left arm remains slightly bent instead of stretching straight as it should be. But I could have landed on my face!


Second stunt
A left arm "out of service" means no paragliding. But end of May I was ok again and thus we decided to have one weeks' holiday at the Atlantic Coast, paragliding on the Pyla Dune and having a good time both of us.

On the highway after twenty minutes' driving my wife said to me "I think the roof box opened". At 80 miles/hour that is bad news. I stopped the car on the side lane and looked back. A sleeping bag, a rug and a plastic basin lay on the fast lane. At that moment a car was driving over the basin. Bam, a noise like a canon firing or a plane crossing the sound barrier.

So I sprinted back as fast as I could to retrieve the stuff and avoid an accident. You are not supposed to spread your belongings on a French motorway where people speed along at 130 or 140 km/hour (80 to 90 miles/hour).

My left foot Achilles tendon did not appreciate the highway racing and broke under the strain. The last meters or feet I was limping along but I got the stuff. I even crossed the two lanes to retrieve the rug that lay on the left side and than limped back to the car.

When the highway police came I was already busy fixing the roof box with a sturdy strap. "Did you cross the highway" one of the cops asked me. "Certainly not", I said and he was obliged to believe me. Quite friendly the chap and even helped me to get back on the highway, slowing down those other speeders passing by.

I drove to the nearest cafeteria. Sitting next to my wife, sipping some lukewarm coffee, I had to tell her that our holidays finished here. I showed her my left foot. There, where the tendon should show a hard tight surface it has a belly-like feeling. She drove the Audi back home, slowly. 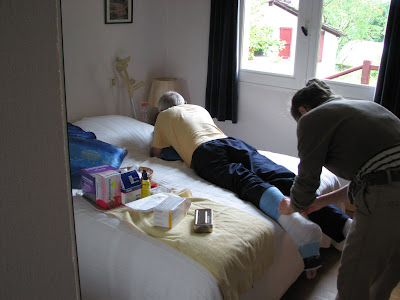 The next day, operation, three nights in the hospital, then 45 days in plastic plaster with two clutches: that is a very different way to live. Two clutches means you have no hands, only four legs. And after that the muscles are gone so I had to learn how to walk, increasing the distance one can make on foot. That takes takes time. In September I was back again at about 80 percent.

Could have been worse, I never had any pain and the highway race, let's forget that one.

During those 45 days on clutches, I decided to try obtaining the "Air Transport Pilot Certificate" on Microsoft's Flight Simulator. It's the most difficult one to get, it requires quite a lot of knowledge, a high degree of concentration and very fast reactions. Obligation to do the right thing at the right time. If somebody is interested just to have a look on YouTube, here is a kind of "walkthrough" showing what to do in order to succeed Splendidly made video. Sure, I will never fly such a plane in reality but it gives a good idea of what is required. Since I am a flightsimmer, I have the highest respect for those pilots doing this demanding job. In case your Internet connection is fast enough, don't forget to click on the HD definition.

Stunt number 3
On a beautiful Thurday morning, three weeks ago, I was driving to Aurillac to buy this and that and meeting my wife there at noon to have a bite. The road from the village to the main road is narrow but large enough to cross even a truck. Each one goes a bit on the grass at the right side and that's it.

I see the car coming towards me, driving confortably in the middle of the road. I sverve to the right, the other one, nothing, I drive a bit more to the right, rien à faire, BAM, BONG. All four airbags came out. Inside the car there was powder smoke as if I was in the midst of the battle of Trafalgar, right near a cannon, on the lower deck. 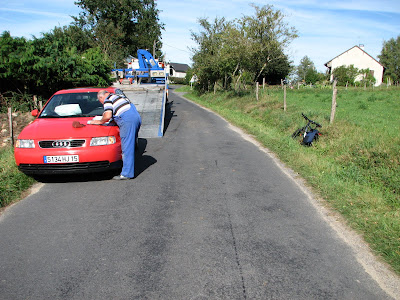 Keeping my breath I scrambled out of the car. Starting to yell at the other driver who had stopped, too. In the middle of the road where we met. Out came a very old man, nearly 80 years old, I guess. He was a bit shaken and did not say a word. Don't know what happened, he must have been dreaming or looking at the green grass in the fields. Afterwards his son told me he is in bad health and his wife has a nervous breakdown.

Those airbags of my 12 year old Audi saved me, or at least my front teeth. The bags came out so fast I don't remember seeing them coming! One of these days I go to see the old man to have a little friendly chat and to ask him how he is doing. The insurance will pay me the full value of my car but by old banger is 12 years old. They give me 5500 €, about 7400 US$.

I think I'll get me another Audi A3, I owe something to that company, oh yes, I am an Audi addict and the next car will be flaming red again.
Labels: Achilles tendon, Airline Transport Pilot, Audi 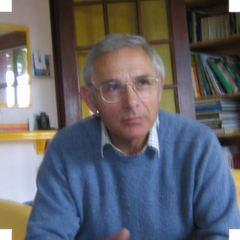 Georg
Living in a tiny village in Central France. As everybody knows, here is the center of the world.